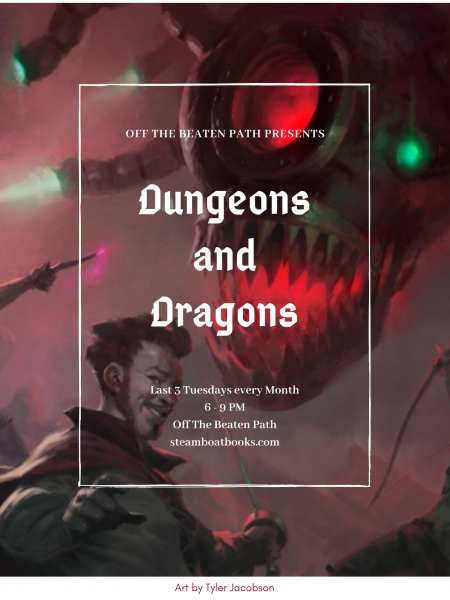 Come on out to enjoy our gaming event at Off the Beaten Path! For those of you who are unfamiliar but interested:

The first Dungeons & Dragons game was played back when Gary Gygax and Dave Arneson chose to personalize the massive battles of their fantasy wargames with the exploits of individual heroes. This inspiration became the first fantasy roleplaying game, in which players are characters in an ongoing fantasy story. This new kind of game has become immensely popular over the years, and D&D has grown to include many new ways to vividly experience worlds of heroic fantasy.

The core of D&D is storytelling. You and your friends tell a story together, guiding your heroes through quests for treasure, battles with deadly foes, daring rescues, courtly intrigue, and much more. You can also explore the world of Dungeons & Dragons through any of the novels written by its fantasy authors, as well as engaging board games and immersive video games.

Capturing the Moment: A Conversation with Rod Hanna About Sports Photography 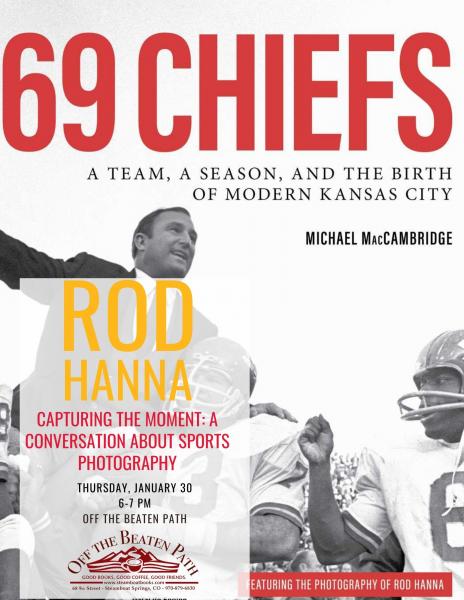 Join us for a conversation with renowned photographer Rod Hanna. We will discuss his art and his time as the Kansas City NFL Team photographer. 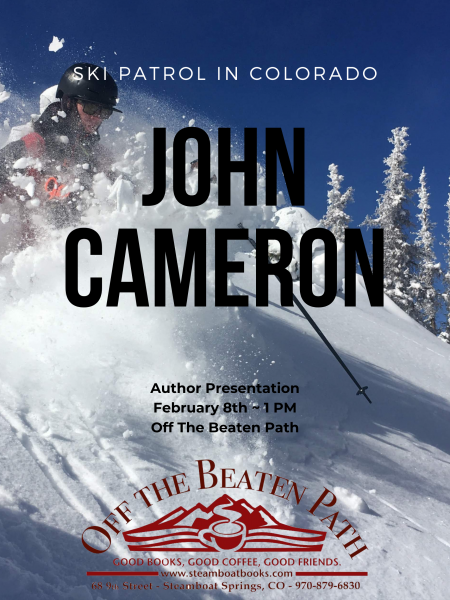 The Army's 10th Mountain Division, developed during World War II for combat missions in the mountains of northern Italy, evolved into ski patrols as we know them today. Far-reaching and nuanced, the job of a ski patroller combines long days, physically demanding work in high alpine environments, and the ability to respond to complex medical emergencies. In Colorado, ski patrol has grown from a volunteer operation to a professional workforce--incorporating advancements in lifesaving techniques, avalanche forecasting, and specialized guest services. Relying heavily on their fellow patrollers, life-long friendships are forged on the mountain and often embellished in legendary tales--many of which are shared within

John's passion for wild places leads him to the Southwest where the mountains drew him in. Work as a journalist and an independent writer satisfies his constant curiosity. 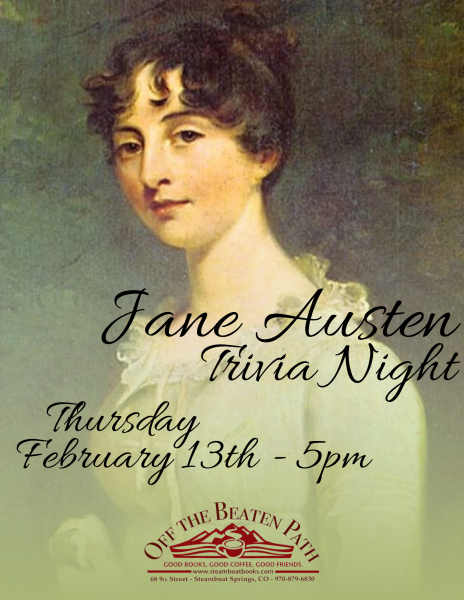 Test your Austen Sense and Sensibilities with us! Prizes and themed drinks 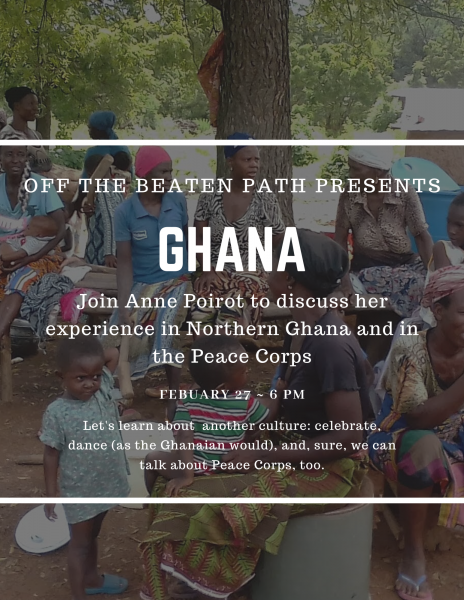 Come meet current Peace Corps Volunteer, Anne Poirot, as she shares her Northern Ghanaian experience. Let's learn about another culture. We'll celebrate, dance (as the Ghanaian would) and sure, we can talk about the Peace Corps too! 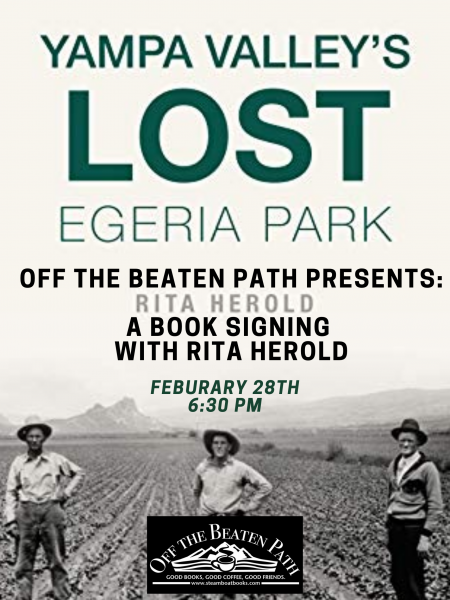 Called the “Last Frontier,” the “Land of the Last Pioneers” and the “Place that Time Forgot,” Routt County was among the last places settled in the continental United States. Between 1820 and 1845, notable people such as Kit Carson, Jim Baker and Jim Bridger were all known to visit the Yampa Valley. But it wasn’t until the removal of the Utes in 1881 that Egeria Park flourished. Stagecoaches, railroads, cattle, grain and sawmills followed. And despite the remote location, it grew into an agricultural and economic hub, the exact boundaries of which are still contested. Alas, Egeria Park dissolved with time. Author Rita Herold uncovers sketches of lost heroes, scoundrels and everyday characters who made history here.

A descendant of the early settlers of Routt County, Rita Herold operates a fifth-generation centennial ranch near Yampa. Following a bachelor’s degree in education from Utah State University, she taught grades K–12 and history for both Colorado Northwestern Community College and Colorado Mountain College. She has given numerous presentations for the Tread of Pioneer’s Museum, Tracks & Trails Museum and the Yampa-Egeria Museum. She served as a board member and volunteer in the CattleWomens Association, Routt County Preservation Board and the Yampa-Egeria Historical Society.

'69 Chiefs: A Team, a Season, and the Birth of Modern Kansas City (Hardcover)

END_OF_DOCUMENT_TOKEN_TO_BE_REPLACED

HOURS SUBJECT TO CHANGE DURING EVENTS