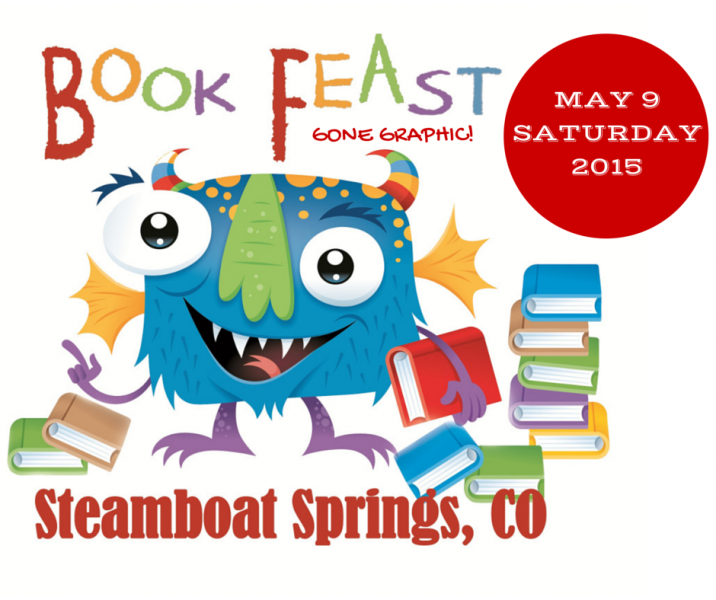 The Book Feast is an all-day literary arts festival for kids and all lovers of children’s books. This year’s free event will be held from 10 a.m. to 3:30 p.m. Saturday May 9, 2015 at the Bud Werner Memorial Library and Steamboat Springs Art Depot. The stellar lineup for this year’s Feast, which is focusing on the illustrated side of kids’ books, features four incredible speakers: Brian Floca, Avi, Karla Oceanak, and Kendra Spanjer.

It is truly an honor to have Brian Floca coming to Book Feast this year as he is one of the hottest names currently in children’s literature, gathering awards left and right for his brilliant illustrations. Brian’s books as author and illustrator include “Locomotive,” for which he received the 2014 Caldecott Medal; “Moonshot: The Flight of Apollo 11”; “Lightship; The Racecar Alphabet”; and “Five Trucks.” He has also illustrated many chapter books for older readers written by other authors, including “Poppy and City of Light, City of Dark,” by Avi, another 2015 Book Feast author. In addition to the Caldecott Medal, Brian's books have received four Robert F. Sibert Honor awards, an Orbis Pictus Award, an Orbis Pictus Honor, a silver medal from the Society of Illustrators. His work has also twice been selected for The New York Times' annual 10 Best Illustrated Books list.

Even if you haven’t picked up a children’s book since you were a baby chewing on “Goodnight Moon,” you’ve probably heard of our next Book Feast author, Avi. Starting out as a playwright — while working for many years as a librarian — he began writing books for young people when the first of his kids came along. His first book was “Things That Sometimes Happen,” published in 1970. Since then, he has published more that 70 books and won many awards, including the 2003 Newbery award for “Crispin: the Cross of Lead,” two Newbery Honors, two Horn Book awards, and an O’Dell award, as well as many children’s choice awards. Avi has owned property in Routt County for many years, and several of his books, such as “The Secret School,” “The Good Dog” and the upcoming graphic novel, “Old Wolf,” (illustrated by Brian Floca), are set in the Steamboat Springs area.

Finally, Book Feast will feature the dynamic duo from Fort Collins who created the award-winning “Aldo Zelnick” comic novel series, Karla Oceanak and Kendra Spanjer. According to the cover article published in the most recent Yampa Valley Electric publication, Oceanak explains that her dream was to create a series of quality books that elementary kids (especially boys) would adore as much as the currently popular potty-humored graphic novels, but would enrich their lives and minds. Pairing up with illustrator, Spanjer, the two created the chubby, curly-headed protagonist, Aldo Zelnick: an athletically challenged, artistic 10-year-old who would rather fill his sketchbooks with comics and eat bacon than embark on more stereotypical Colorado adventures with his friends and family. The series follows an A-Z format in which the eighth book, “H is for Hotdogger,” features Aldo attempting to ski in Steamboat Springs, and the 10th book in the series, “J is for Jackpot,” which depicts Aldo vacationing in Dinosaur National Monument. These books are laugh-out-loud funny and certainly a series that Steamboat kids would especially enjoy reading because of all of the local spots that Aldo visits. Sarah Kostin is the children's librarian at Bud Werner Memorial Library and today she delighted readers of the Steamboat Pilot with this wonderful collection of children's books! Check out her favorite picture books from 2014, and be sure to add your favorites to your wishlist!

In addition to our picks for adults, we bring your 5 books as chosen by our youngest readers, as featured in the Steamboat Pilot today...

END_OF_DOCUMENT_TOKEN_TO_BE_REPLACED

HOURS SUBJECT TO CHANGE DURING EVENTS