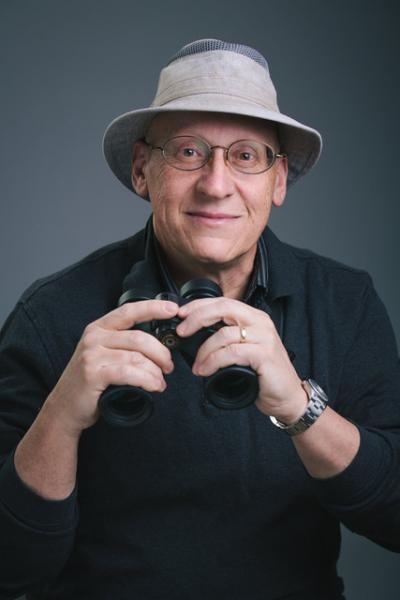 *Masks are required to attend this live event in Library Hall.

While the road from non-fiction to fiction is one that many writers have taken, the one from birder to murder mystery writer is less well-traveled. Author Steve Burrows takes a light-hearted look at the impact birders and non-birders alike have had on his development from environmental journalism to writing Birder Murder Mysteries. Burrows will also look at the part birds and birding continue to play in both his personal life and his career as a novelist.

Burrows' newest book is A Dance of Cranes, the sixth installment of the popular Birder Murder series. A trail of a murderer leads Domenic Jejeune across a vast continent… Newly estranged from his girlfriend, Lindy Hey, Inspector Domenic Jejeune returns to Southern Ontario, where he receives news that his brother, Damian, has gone missing in Wood Buffalo National Park while conducting research on Whooping Cranes. Domenic immediately heads out to try to find him. Back in the U.K., Jejeune’s plan to protect Lindy has failed, and she has been kidnaped by his old foe, Ray Hayes. Jejeune’s trusty sergeant, Danny Maik, tracks down Lindy, but there is far more to the situation than he anticipated. With Lindy in imminent danger, Maik is forced into a desperate rescue attempt. Will either of them survive? And if so, can they find their way back to each other?

Steve Burrows began his life-long interest in birds and nature in the urban parks of his childhood home in Birmingham, UK. After relocating to Hong Kong as an adult, he became editor of the Hong Kong Bird Watching Society Magazine, and a contributing field editor with Asian Geographic. Burrows has birded on six continents and his freelance articles on travel and environmental issues have appeared in publications all around the world, earning him a number of accolades including a Nature Writer of the Year award from BBC Wildlife magazine. In 2019, Burrows was invited by Margaret Atwood be to the Guest Author at her annual SpringSong event. The first novel in the Birder Murder Mystery series, A Siege of Bitterns, won the Crime Writers of Canada award for Best First Novel, and was selected as one of the top 100 books of the year. Burrows has recently signed a three-book deal for more Birder Murders, and in 2022 a major UK/Canadian co-production will be bringing the Birder Murder Mysteries to TV screens. Burrows lives in Oshawa, Canada with his wife, Resa.

The Greater Sandhill Crane is an iconic species of the Yampa Valley. Returning in the spring, cranes nest and raise their young in wetland areas throughout the valley. In late summer and early fall, hundreds of cranes from the Rocky Mountain flock join the local birds to rest and feed before continuing their journey south. The Yampa Valley Crane Festival celebrates these iconic birds with daily crane viewings, expert speakers, films, art exhibits, workshops, family activities and more. Bud Werner Memorial Library is festival headquarters and the venue for many of these talks, films, and events. Learn more about the 10th annual Yampa Valley Crane Festival.

A Dance of Cranes: A Birder Murder Mystery (Paperback)