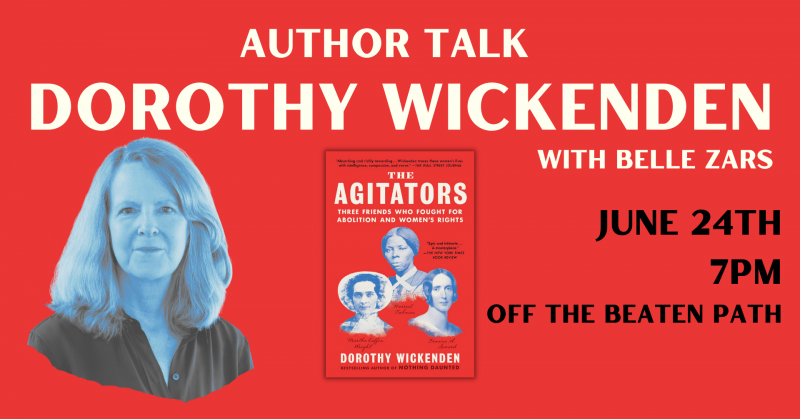 Two talented authors, three moving books, one cozy location: Off the Beaten Path! Join us for an engaging presentation by Dorothy Wickenden and Belle Zars about their books. Dorothy will be talking about her newest book, The Agitators, and a local favorite, Nothing Daunted. Belle will be presenting her book, Only Connect. Come to Off the Beaten Path on June 24th at 7 pm for a compelling presentation, lively Q&A, and a personally signed copy of your favorite books.

Dorothy Wickenden is the author of Nothing Daunted and The Agitators and has been the executive editor of The New Yorker since January 1996. She also writes for the magazine and is the moderator of its weekly podcast The Political Scene. A former Nieman Fellow at Harvard, Wickenden was national affairs editor at Newsweek from 1993-1995, and before that was the longtime executive editor at The New Republic. She lives with her husband in Westchester, New York.

“Engrossing... examines the major events of the mid 19th century through the lives of three key figures in the abolitionist and women’s rights movements.” —Smithsonian

From the executive editor of The New Yorker, a riveting, provocative, and revelatory history of abolition and women’s rights, told through the story of three women—Harriet Tubman, Frances Seward, and Martha Wright—in the years before, during and after the Civil War.

“The Agitators tells the story of America before the Civil War through the lives of three women who advocated for the abolition of slavery and for women’s rights as the country split apart. Harriet Tubman, Martha Coffin Wright, and Frances A. Seward are the examples we need right now—another time of divisiveness and dissension over our nation’s purpose ‘to form a more perfect union.’” —Hillary Rodham Clinton

In the 1850s, Harriet Tubman, strategically brilliant and uncannily prescient, rescued some seventy enslaved people from Maryland’s Eastern Shore and shepherded them north along the underground railroad. One of her regular stops was Auburn, New York, where she entrusted passengers to Martha Coffin Wright, a Quaker mother of seven, and Frances A. Seward, the wife of William H. Seward, who served over the years as governor, senator, and secretary of state under Abraham Lincoln. During the Civil War, Tubman worked for the Union Army in South Carolina as a nurse and spy, and took part in a spectacular river raid in which she helped to liberate 750 slaves from several rice plantations.

Wright, a “dangerous woman” in the eyes of her neighbors, worked side by side with Elizabeth Cady Stanton and Susan B. Anthony to organize women’s rights and anti-slavery conventions across New York State, braving hecklers and mobs when she spoke. Frances Seward, the most conventional of the three friends, hid her radicalism in public, while privately acting as a political adviser to her husband, pressing him to persuade President Lincoln to move immediately on emancipation.

The Agitators opens in the 1820s, when Tubman is enslaved and Wright and Seward are young homemakers bound by law and tradition, and ends after the war. Many of the most prominent figures of the era—Lincoln, William H. Seward, Frederick Douglass, Daniel Webster, Charles Sumner, John Brown, William Lloyd Garrison—are seen through the discerning eyes of the protagonists. So are the most explosive political debates: about the civil rights of African Americans and women, about the enlistment of Black troops, and about opposing interpretations of the Constitution.

Through richly detailed letters from the time and exhaustive research, Wickenden traces the second American revolution these women fought to bring about, the toll it took on their families, and its lasting effects on the country. Riveting and profoundly relevant to our own time, The Agitators brings a vibrant, original voice to this transformative period in our history.

From the author of The Agitators, the acclaimed and captivating true story of two restless society girls who left their affluent lives to “rough it” as teachers in the wilds of Colorado in 1916.

In the summer of 1916, Dorothy Woodruff and Rosamond Underwood, bored by society luncheons, charity work, and the effete men who courted them, left their families in Auburn, New York, to teach school in the wilds of northwestern Colorado. They lived with a family of homesteaders in the Elkhead Mountains and rode to school on horseback, often in blinding blizzards. Their students walked or skied, in tattered clothes and shoes tied together with string. The young cattle rancher who had lured them west, Ferry Carpenter, had promised them the adventure of a lifetime. He hadn’t let on that they would be considered dazzling prospective brides for the locals.

Nearly a hundred years later, Dorothy Wickenden, the granddaughter of Dorothy Woodruff, found the teachers’ buoyant letters home, which captured the voices of the pioneer women, the children, and other unforgettable people the women got to know. In reconstructing their journey, Wickenden has created an exhilarating saga about two intrepid women and the “settling up” of the West.

Belle Zars is an independent researcher and historian. She grew up in and around Hayden, Colorado, the granddaughter of local homesteaders. As a Quaker she has long been fascinated with the experience and practice of belonging in community. She holds a doctorate from Harvard University where she wrote her dissertation on the Elkhead School and district consolidation.

Two Cultures - One LandOnly Connect is the story of Yamparika Ute Indians and later, homesteaders and teachers, in Bears Ears Country or Elkhead, Colorado. With a micro-historical approach, the book chronicles forced removal, suffering, dislocation and loss, as well as courage, achievement and resilience. The author weaves together first-person accounts, interviews, letters and diaries with grounded knowledge of place to bring to light previously untold and buried history while exploring the questions: What is the sense of connection and belonging embedded in our social lives? How do communities form and what nourishes and sustains them? How do individuals come to consider the well-being of the whole and practice action for the common good?

The Agitators: Three Friends Who Fought for Abolition and Women's Rights (Paperback)

Nothing Daunted: The Unexpected Education of Two Society Girls in the West (Paperback)