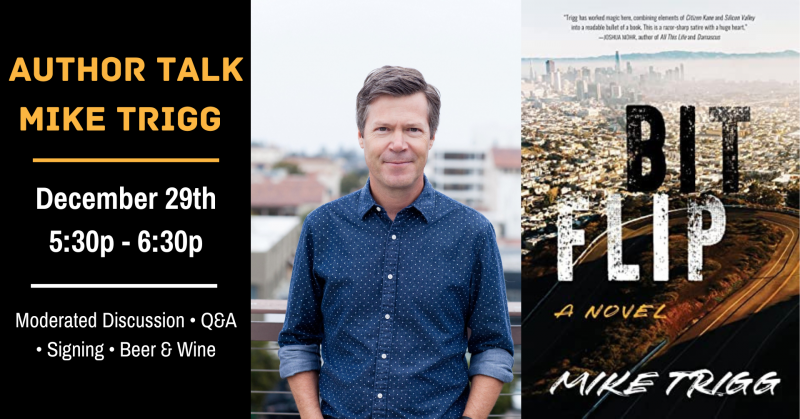 Join us at Off the Beaten Path as we host Mike Trigg, author of Bit Flip! Mike Trigg will discuss his book in a moderated discussion and Q&A with Off the Beaten Path Bookstore owner, Mike Skov. Come with questions, books for signing, and all of your friends. Our bar will be open and stocked with beer, wine, and a signature cocktail.

As Silicon Valley and the technology coming out of it grow increasingly more important in our lives, cultural commentary on the adventures and behaviors exhibited in that world have evolved accordingly.  There was Po Bronson’s The First $20 Million is the Hardest in the late 90s, when the promise of technology and the Valley was still hopeful.  The HBO TV series Silicon Valley debuted in 2014, as the high-tech gold rush was at its peak and that world and those of us outside of it were ready to peek in through a comic lens.

The capitalism fueling Silicon Valley is more visible on the surface today, and Mike Trigg expertly captures the human toll the culture takes in his debut novel Bit Flip.  Sam Hughes, the protagonist, speaks his mind in the opening scene of the book and then finds himself unemployed.  In his quest to reshape and regain the success he was building, Hughes endures a birthday party host in a Speedo, a humbling trip back to his hometown in Ohio, and a complicated relationship with his wife.

Trigg reliably uses his decades of experience as a Silicon Valley executive to sketch the right framework for the technology and deal-making that move this story forward. He has elevated the story, however, by focusing on the personal ramifications the Valley’s lifestyle inflicts.  In doing so, we are reminded that determination, resilience, and the best intentions don’t always lead to good behavior.  While this phenomenon is perhaps more prevalent in Silicon Valley, Trigg’s interpersonal focus also reminds us of the vulnerabilities to be found anywhere.

"I caught the technology bug in the mid-90s, back when it was called the “Information Superhighway.” My career in tech began at MCI, the telecommunications giant. After earning my MBA at UC-Berkeley in 1998, I dove headfirst into the heart of the dot-com boom. The first startup I joined was acquired for over $3 billion at the peak of the bubble.

Since then, I’ve spent my career at a wide range of technology companies — from tiny startups to multi-national companies. I’ve been a founder (three times). I’ve been a C-level executive. I’ve been an investor. Some have succeeded. Many have failed. In my twenty-plus years in Silicon Valley, I’ve seen it all. My entire career has been defined by this world, and I’ve seen dramatic changes over that time.

As my career has progressed, I’ve found myself increasingly interested in documenting and describing the unique culture of Silicon Valley. In addition to my debut novel, Bit Flip, I post regularly to my personal blog, and I’ve been a guest columnist in many tech publications, including TechCrunch, Entrepreneur, VentureBeat and Fast Company.

For more detail on my professional background, please visit my LinkedIn profile, or connect with me on social media at the links below.

Purchase the book before the talk!