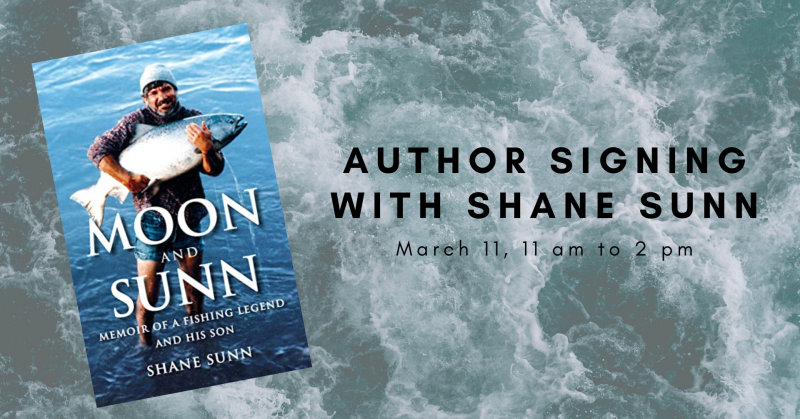 Join us at Off the Beaten Path Bookstore on March 11th from 11 am to 2 pm for Shane Sunn's author signing! He is the author of the fishing family memoir, Moon and Sunn!

A minister recalls the life of his father, a Mississippi fishing legend, in this debut family memoir.

Sunn grew up in the small town of Ackerman, Mississippi, in the 1960s. When he was 5, his parents divorced, and afterward, he mostly saw his father, James William “Moon” Sunn, on “sporadic weekends” whenever he was home from fishing the Kenai River in Alaska. Moon was intent on catching the “world record king salmon” and always believed that his next cast would hook him the prize. For many people of Ackerman, Moon was the “ ‘go-to’ guy” in any emergency, and Sunn tells tales of his heroics, such as saving a boy from drowning in a local lake. Such stories of Moon being “everyone else’s hero” run counter to the author’s feeling of disconnection from his dad. Sunn ably weaves in other elements of family history, recounting stories of his grandfather Mack Sunn relishing fishing and hunting before serving in World War I. At the close of the memoir, the author wrestles with the prospect of his aging father’s passing. Sunn’s portrait of his parent is engaging and wistfully poetic: “Moon is cut from a different cloth, and nothing can deter him from what he determines to do, whether death or life, angels or rulers, things present or things to come.” There are affecting, confessional moments when the author digs deep to reveal how he felt about his parents’ divorce: “Kids asked me sensitive questions like, ‘Do you live with your daddy or your momma?’ What that really meant was, ‘You’re not like us.’ ” Sunn also turns his attention to capturing the atmosphere of the American South and sometime offers gruesome details; following Mack’s heart attack, Sunn writes that the doctor “called for a hot iron….Before the days of defibrillators, apparently, hot irons were utilized in an attempt to jumpstart a dead heart.” The rapid-fire anecdotes result in a somewhat fragmented work, but there’s sufficient charm and intrigue in Sunn’s prose to overlook this. Overall, it’s a delightfully idiosyncratic debut.

“He thinks like them fish think,” author Sunn recalls hearing locals from his hometown of Ackerman, Mississippi, marvel about his father, James William “Moon” Sunn. In this striking memoir, the younger Sunn, a pastor, honors the figure that loomed so tall in Ackerman, a fisherman of great repute, in the Gulf and Alaska and the lakes that WPA projects created in Mississippi; a friend to stray dogs and stray people; the man everybody called for whenever somebody faced drowning in Choctaw Lake. The adventures of “Moon,” as the father was known, and his “all-out pursuit of fish,” make for irresistible reading, especially as Sunn often shares them in Moon’s own inimitable voice: “A boat gives you an unfair advantage,” Moon says, explaining his preference for wading when fishing for salmon. “You never feel the fish’s full power because once you hook ’em, you can just drift with ’em.”

But Moon and Sunn is a richer, more moving book than it is just a collection of excellent fish stories. Sunn notes that stories of Moon have inevitably gotten exaggerated over the years, especially around Ackerman, and in his retellings he takes pain to filet away the elements of tall-tale. That means even the wildest stories—Moon representing himself in court when accused of killing a doe illegally; Moon attempting to float his canoe 85 miles from the family home to a reservoir during Mississippi’s Easter Flood of 1979—stay refreshingly human scaled.

Touchingly, Sunn never shies away from the challenges of having a folk hero as a father, and his accounts of at times feeling isolated in the great man’s shadow, especially after Moon’s divorce from Sunn’s mother in the early 1960s, have real power. Sunn’s prose is clear and strong as a mountain stream current, and this tribute to—and reckoning with—his father will get its hook into lovers of outdoor adventure and father-son stories.

Moon and Sunn: Memoir of a Fishing Legend and his Son (Paperback)